Obesity and Inflammation: The Low-down

A few days ago I read an article in Huffington Post regarding obesity, social stigma, personal struggles and the medical community's handling of the epidemic. The author shed a lot of light on the personal struggles of people who have been obese their whole lives or for most of their life. Obesity isn't just a problem of calories because being overweight carries a cetain social stigma; it is obvious to any observer whereas other diseases may not be.  First impressions come hard for these individuals: friends, family and most of all medical intervention.

We know now that being obese or overweight is typically the catalyst for metabolic syndrome, not the other way around.  Growing up I'd sometimes hear overweight kids say "my doctor said I am overweight because of my slow metabolism" and I know because my doc said the same thing to me.  Interestingly we would typically see an overweight person with a higher resting metabolic rate as the body is trying to counteract the over fed state.  We see this in dieting or bulking.  A relatively healthy person adding a lot of calories to add muscle mass will see an increase in resting metabolic rate (RMR).  Someone dieting will see a decrease in RMR.  These mechanisms are in place to preserve homeostasis.

But of course, being obese and in an over-fed state for a LONG time creates other health problems including metabolic problems.  Metabolic Syndrome is characterized by impaired inslulin sensitivity, atherosclerosis and diabetes.  While some people may be genetically born with diabetes most of the cases of metabolic syndrome are obesity induced.  Diabetes alone does not mean you'll be overweight - diabetics can be trim or overweight but we're talking about the large majority of obesity induced symptoms. 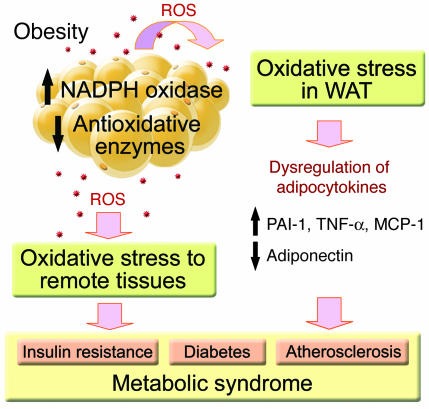 Coming back to calories, if just eating less solved everyone's issues, the presciption would be fairly simple.  But someone who has chronically over-eaten and been obese for their entire lives are dealing with more issues than just eating past fullness.  Most likely some mental and emotional health issues are at play.  Pressure from friends and family, feeling like an outcast and being socially isolated and judged.  So when an obese person goes to their doctor and as the article quotes one doctor saying "eat less and exercise more" and another says "I only eat 1 egg for breakfast and look at me!" it's pretty cringe worthy.

One problem, as we see from the graphic above is that inflammation,  insulin resistance and all the factors of Metabolic Syndrome stem from the initial factor of obesity but this does not mean just eating less solves all the other issues.

Two major things do not work in this scenario.  One is giving the most obvious and insensitive advice such as eat less and exercise more.  It says nothing about how to approach these issues.  Eat what?  How much?  What kind of exercise?  How long do I exercise?  Second is having a physician recommending diet advice based on their own experience.  Most docs get less than 20 total hours nutrition education over their college education.  And if the practitioner doesn't know enough to educate the patient they'll go off of anecdote and personal bias.

When someone has been overweight or obese for years and years we are no longer looking at just calories in vs out. The downstream effects of being over-fed induce metabolic syndrome as discussed before as well as chronic inflammation both systemically and locally.  Meaning your cells (mitochondria in particular) and tissues like muscles, fat cells and liver all suffer the affects.

If you've got a car that has been missing oil changes, running on bald tires, misfires on a cylinder and won't start...it's not just the battery anymore.  We've got years of absuse or neglect of the entire system that now are not reflective of just "cars that don't start have dead batteries".  We actually need to deal with the care and maintenance of the vehicle's system as a whole for everything to improve.  At this point it doesn't matter that a client has been over-eating for a long time.  We KNOW that.  It's not a secret.  It's also not the only issue.

Inflammation, stress and the mitochondria

At this point you might be wondering what I'm alluding to.  If it isn't just the calories anymore, then how do we combat obesity?  Lets look at what happens to your body in an obese and over-fed state.

Mitchondria, if you remember from high-school biology, are often called the powerhouse of the cell.  But they are much more than that.  Mitochondria do produce all the body's energy; mitochondria use nutrients from food to produce ATP which is essentially the energy currency of the body.   ATP is produced from the breakdown of things like glucose and fatty acids.  It makes sense that muscle glycogen and body fat stores exist as reserves for fuel because ATP cannot be stored.  If we could not store glycogen or fatty acids we could never meet our ATP demands.

How much ATP do we produce every day?  The average cell (which can contain 1,000 to 2500 mitochondria) uses 10 BILLION ATP per day which amounts to the average person  at rest producing their bodyweight in ATP per day.  The majority of ATP is produced in an oxygenated state, hence you breath!  Mitochondria are so important that the major reason you breathe is so your lungs can transport oxygen from their air to the blood which brings it to your cells where mitochondria produce aerobic energy.  Pretty darn important.

Mitochondria used to be thought of as solely governed by the cells nucleus or the control system of the cell.  But science now knows that the mitochondria are almost an organisms within an organisms, acting on their own and telling the nucleus vital information.  Feedback from the mitochondria is important.  Think of the cell as a city, the nucleus it's city commander and control center.  The nucleus governs the city, it's use of resources and response to threats.  But the mitochondria are the infrastructure component of that city, they deal with incoming people, regulate resources and deal with threats.  They then relay this information to the command center which decides how to adapt to this information.

Since mitochindria are the organelles actually creating energy from food, they act as energy-sensing regulators and here's where things go beyond calories in vs calories out.

Some practical examples are in a calorie deficit, the mitochindria sense lower energy intakes and respond by telling the cell to down-regulate energy usage, upregulate things like gluconeogenesis and autophagy to breakdown tissue for energy and inhibiting cell growth. In this case the liver might create ketones and fat cells will undergo lyploysis (fat breakdown) to provide fuel.

When mitochondria undergo over-feeding for a long time it induces not only the growth of fat cells to store the excess nutrients but creating of new fat cells as well. What most people think of fat cells is just a place to store excess energy.  But fat cells are in fact hormonally active! Fat cells release leptin which not only tell you that you're full but also help set off menstruation which is why females with very low body fat stop getting their period (there are more factors of course).

Fat cells release adipokines, essentially proteins that signal cells to do varying things.  Leptin, as I mentioned, is an adipokine. As fat cells grow in size they undergo disregulation of adipokines which produces pro-inflammatory markers.  Here's where we are beyond just calories.  Lets take an inflammatory marker elevated in obesity like IL-6. IL-6 is linked not only to auto-antibody production which is your own immune system attacking your healthy cells, can disregulate neurons and IL-6 actually causes some pro-insulin factors which will disregulate blood sugar.  When we've dug ourselves into a giant hole of inflammation we are dealing with such varied and mutli-level affects that our main goal NOW is to reduce inflammation not just eat less. 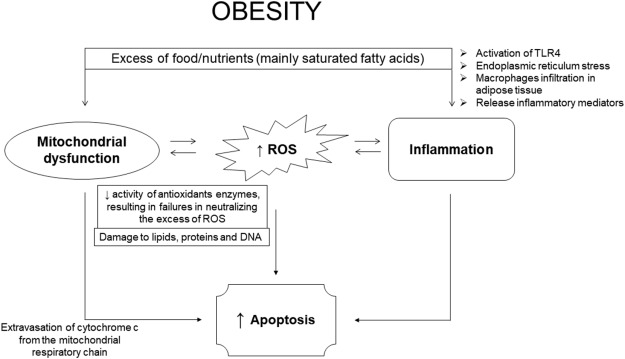 Just look at the big labels above.  We start with obesity which creates the downstream effects of inflammation, cell death and mitochondrial dysfunction which all not only create a higher disease state but make losing weight much more difficult.

A deeper dive into inflammation

As your mitochondria uses oxygen to create ATP about 4% of that oxygen is not properly reduced during electron transport.  This unreduced oxygen is susceptible to free-radical creation as well as Reactive Oxygen Species.  You've heard of antioxidants, right?  The body has many antioxidant systems in place to deal with ROS's because these free radicals cause damage to cells.  If a cell cannot properly dispose of the ROS's it will undergo cell death. ROS's can damage DNA, lipids, proteins and more through oxidation.  Think of oxidation as what happens to metal over time....it rusts. Oxidative damage in your body is normal but excess oxidative damage causes major changes in DNA markers and how cells respond.

Sound like diabetes to anyone?  Inability to store glucose in muscle tissue OR fat cells which causes dangerously high levels of blood glucose as well as a reduced ability of the liver to create insulin to clear thr glucose.  This is accompanied by an inability to breakdown stored body fat as fuel and NOW we are seeing why obese patients who crash diet here and there sometimes see no results.  The inflammatory response is so great that even burnign fat in a low-calorie state is impaired.

Cells undergo apoptosis or cell death on a regular basis, it is programmed into our DNA.  A positive example of apoptosis is when you are in the womb and your hand looks more like a paw without clearly defined digits.  Apoptosis helps kill off excess cells that web the fingers together so they can form individually.  But unregulated cell death can cause damage to the brain, endothelial cells and fat tissue to name a few.  Excess body fat has a strong correlation to increased apoptosis.  Obesity and chronic inflammation increase this uncontrolled cell death which causes systemic tissue damage.  Think of poor blood flow and diabetic patients losing digits and limbs to their disease.

What this tells us

This was a LOT I threw at you, I know.  But if you hopefully made it through and grasped some large points it is this:

These factors combine to show us someone who has lost the ability to properly use nutrients, store them, deal with inflammation, regulate their appetite and even remain emotionally stable.  We see implications for neuron damage like in Parkinson's, inability to produce insulin like Type-1 Diabetes and brain impairment.

Clearly we now have a greater view of obesity as a function of more than just calories.  We have to look at inflammation, stress on the system and environment.  Lets go back to what environment created the perfect storm for someone to become obese.  Some people have the alcoholic gene or a predisposition for addiciton but if not placed in the right environment and stressed those disease states never come up.  I think we can all agree that genetically someone has to be able to grow to 400, 500 or more pounds.  For most of us, if we over-ate we could become obese but probably have some built-in mechanisms that stop us from becoming gigantic.  But there are people out there with the right combination of genetics and environment to move outside almost any norm, even for obese populations.  Most of us can grow muscle pretty well but unless our genetics allow it, we can't be Andre the Giant.

When someone is now in this diseased state of inflammation, appetite disregulation and improper cell signaling, we cann't just fix it with fewer calories. You can't get an alcoholic healthy by removing the alcohol from their hand but telling them it's still cool to hang out in bars.  Environment is the trigger for a lot of this.