Insulin Response: It Comes from Eating Protein Too

It’s pretty well known that eating carbs causes an insulin release. But what many people don’t realize is protein causes a similar response.

What is an insulin response?

When we eat a meal, our digestive system breaks down food into nutrients that are absorbed into the bloodstream.

Carbohydrates are broken down into sugars, which lead to an increase in blood sugar after consuming them. It’s this rise in blood sugar that triggers the release of the blood-sugar-lowering hormone, insulin. This process is known as an insulin response.

This process is crucial because of the delicate balancing act we call blood sugar.  The body likes to keep a tight reign on blood sugar as too low or too high can have deleterious effects.  We often hear insulin and think "bad" when in fact it is absolutely essential for optimal health and function.

Benefits and dangers of an insulin response

The rise in insulin after eating helps move sugar into body tissues, and therefore keeps your blood sugar from getting too high.

Note from Luke: Think of insulin as a traffic cop.  It tells the blood sugar(glucose) where to go.  In normal and healthy individuals the glucose fuels your nervous system, red blood cells, brain and muscle tissue.  With optimal amounts and good insulin sensitivity, glucose fuels your nervous system and is burned off as energy.  With too much or poor insulin sensitivity your muscle don't readily grab the glucose and it goes to where it's always welcome: fat stores.

But the release of insulin can have negative effects. Too much insulin, for instance, can stress the pancreatic cells that secrete insulin. And this added stress might cause the exhausted cells to stop releasing insulin normally or, in the worst cases, to die. These outcomes are particularly dangerous, as your body needs insulin to maintain normal blood sugar levels.

A diet high in refined carbohydrates, low in fiber and protein can lead to insulin resistance and diabetes.  When you are constantly stimulating insulin and causing huge blood sugar swings, eventually your muscles become less sensitive to it's effects.  So to get the muscle to absorb the glucose you need more insulin, then more and then more.  Pretty soon the muscle doesn't really respond to insulin and much of the glucose is stored as bodyfat and even sometimes in the liver, leading to fatty liver disease.

With information like this, many people read "blood sugar" and "insulin" and think that carbohydrates are bad and insulin is worse.  In fact, many claims about insulin responses are taken out of context as the glycemic index of foods are measured individually (such as w hite potato) and almost no one ever eats a white potato alone.  Combined with protein, fats and fiber the glycemic index becomes irrelevant, blood sugar spikes are blunted and insulin release is dampened.

If all of that isn't enough for you, let find out below how protein also stimulates insulin which should lessen some fears about insulin's effects and shed light on why it is important, healthy and normal.

Effects of different types of protein

Different proteins are digested and absorbed at different rates. For example, whey protein is absorbed much faster from the digestive tract than casein protein.

In fact, a July 2007 article published in the "Diabetes/Metabolism Research and Reviews" showed that whey protein resulted in “higher after-meal amino acid concentrations and a greater insulin response than casein”.

A similar study, conducted in 2011, concluded the daily intake of at least one high-protein meal (especially whey protein) consumed with low to moderate amounts of carbohydrates increases insulin release and lowers blood sugar.

But still, research has shown that 35 grams of casein is enough to spike insulin after an overnight fast. And this insulin spike from protein occurs very quickly after protein intake, typically reaching its peak levels at about 15 minutes after ingestion.

The Food Insulin Index measures the body’s insulin response to individual food items. Check out the insulin score for some common foods below: 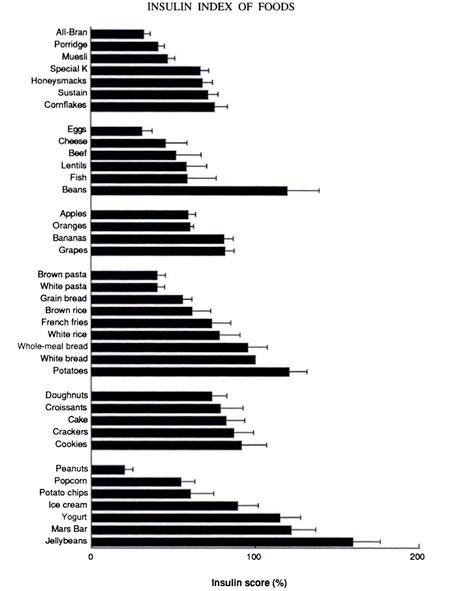 While high protein, virtually no-carb foods like meat and eggs are low on the glycemic index, they measure high on the insulin index. In other words, while the meat and eggs didn’t cause a spike in blood sugar the way most carbohydrates do, they do result in a significant rise in insulin.

Furthermore, high-protein foods frequently stimulate insulin to a similar, or sometimes even greater, degree than high-carbohydrate foods. For example:

Quick tip: Protein also stimulates glucagon, an antagonist to insulin.  So even though carbohydrates and protein spike insulin which lowers blood sugar, protein also stimulates glucagon which elevates blood sugar, resulting in a stable environment. This is one reason why eating protein at most meals and snacks is so beneficial it helps balance the relationship of blood sugar and insulin as well as keeping you full and building muscle.

As you can tell, gauging the relative insulin responses of certain foods can be challenging and the actual numbers can be surprising. Maintaining a healthy blood sugar is important to everyone’s health, regardless of whether or not you’re diabetic. If you want to double check, be sure to look up the insulin response levels of the foods you’re consuming!

Whether your goal is muscle gain or fat loss, stimulating insulin after a workout is beneficial.  The reason?  Insulin is anti-catabolic which means it stops muscle breakdown.  Not only does this present a better environment for muscle growth but also ensures you do not LOSE muscle mass while dieting.

Since we know from above that protein (and especially whey protein) stimulate insulin, consuming a high protein meal after a workout and even a whey shake directly after a workout stimulates insulin which halts muscle breakdown. The insulin also helps shuttle the protein into muscles to help BUILD muscle tissue.

So even on a fat loss diet or low-carbohydrate diet stimulating insulin at key times can be quite beneficial. If your goal is performance or muscle gain you have more leeway to stimulate insulin with carbohydrates around a workout from an overall calorie perspective. But in a fat loss and/or low-carb phase a whey protein shake helps keep calories down while accomplishing the same insulin release.